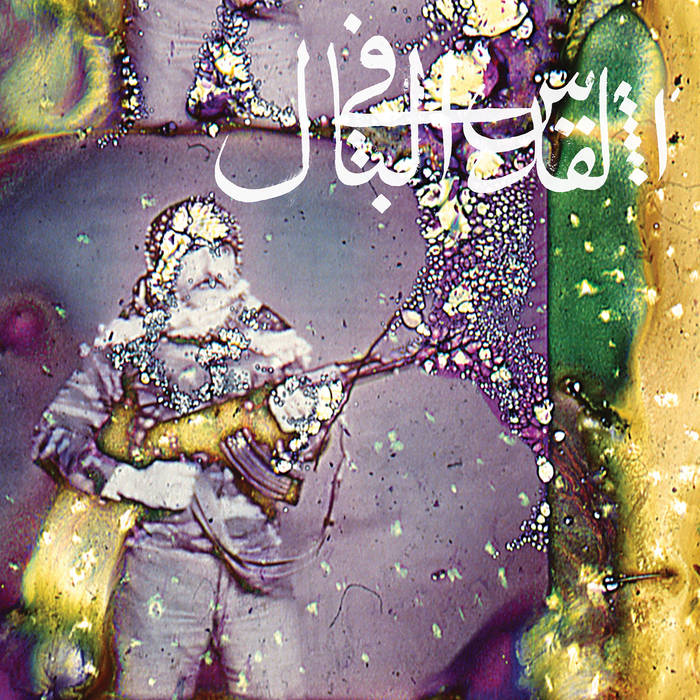 Jerusalem In My Heart (JIMH) returns with Daqa'iq Tudaiq, the third full-length album from the Montréal-Beirut contemporary Arabic audio-visual duo, following the acclaimed 2015 release If He Dies, If If If If If If (year-end lists at The Wire (#39), The Quietus (#24) and A Closer Listen (Top 10), among other accolades). Featuring voice, electronics, buzuk and other instrumentation from composer-producer Radwan Ghazi Moumneh (Matana Roberts, Suuns, BIG|BRAVE) and complemented by the 16mm analog film work of Charles-André Coderre in live performance, JIMH continues to expand the horizons of its profound conceptual and aesthetic engagement with Arabic/Middle-Eastern traditions. Daqa'iq Tudaiq translates as “minutes that bother/oppress/harass” – which presumably needs no further explanation – and features two distinct album sides of music.

Side One realizes a long-held dream of Moumneh’s to record a modern orchestral version of the popular Egyptian classic “Ya Garat Al Wadi” by the legendary composer Mohammad Abdel Wahab. JIMH assembled a 15-piece orchestra in Beirut, enlisting the celebrated Montréal-Cairo musician/composer Sam Shalabi (Land Of Kush) as arranger and musical director for the session. Anchored by the stately hypnotic pace of plucked and percussive instruments (riq, santur, derbakeh, kanun), the piece unfolds with lush, languid, reverb-drenched manoeuvrings through virtuosic Maqam shifts (oriental scales). Moumneh’s melismatic lead vocals and electronic production sensibility pay homage to the genre’s documented historical recording traditions, while pushing things subtly and respectfully into new territories of sonic distortion and noised, artefact-laden transmission. ﻿The song’s original title (with lyrics penned in 1928 by the poet Ahmad Shawqi) translates as “Oh Neighbour Of The Valley”, but JIMH takes a different line from the original lyric as the new title for its orchestral-electronic re-interpretation. “Wa Ta'atalat Loughat Al Kalam” (“The Language Of Speech Has Broke Down”) is an expression of wordless love and transcendent communication between two lovers’ eyes in Shawqi’s poem; JIMH re-titles the song with this line, exploding the sentiment with more complexity, tragedy and socio-political meaning – also prefiguring the formal aesthetic ruptures JIMH bring to the piece itself. Love in a time of politics, politics in a world conspiring against love, and the specificity of Arab diasporic experience in our brutish 21st century.

﻿Side Two comprises four tracks of non-ensemble “solo” material by Moumneh which push rupture and decomposition/recomposition of tradition further into avant-garde territory – voice, buzuk and electronics take the lead on a suite of emotive and evocative songs, including the percussive loop-driven instrumental “Bein Ithnein” (“Between Two” ) and the stunningly unsettling processed vocal track “Thahab, Mish Roujou', Thahab” (“The Act Of Departing, Not Returning, Departing”).

﻿Daqa'iq Tudaiq is a masterful, mesmerizing artistic statement and confirms Jerusalem In My Heart as one of the most engaged and forward-looking groups at work in avant-garde Middle Eastern music today. Thanks for listening.